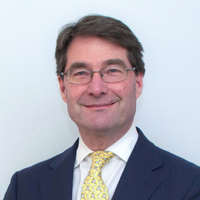 Mr. Cooke is an experienced professional with more than 30 years of experience in the real estate sector. Mr. Cooke joined Cushman & Wakefield in 1980 in London where he had a role in drafting valuation standards (Red Book). Since 1995 until the end of 2013, he served as Chief Executive Officer of Cushman & Wakefield Spain, leading the company to attain a leading position in the sector.

In the 2017 New Year’s honours’ list, Mr. Cooke was awarded an MBE for his services to British businesses in Spain and to Anglo-Spanish trade and investment.

Mr. Cooke holds an Urban Estate Surveying degree from Trent Polytechnic University (Nottingham, UK) and is currently a Fellow of the Royal Institution of Chartered Surveyors (FRICS). Until May 2016, he was the President of the British Chamber of Commerce in Spain. Since September 2017, Mr. Roger Maxwell is Chairman of the Editorial Board of Iberian Property and since January 2020 is RICS Chairman in Spain.