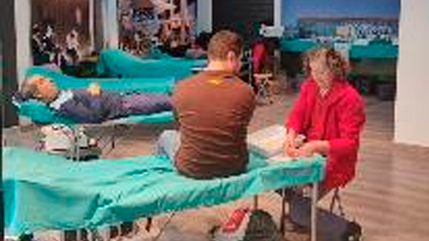 On 13 February, in partnership with Valencia’s Regional Blood Transfusion Centre, we put an unused room at the Portal de la Marina shopping centre to good use by transforming it into a dedicated space for giving blood. 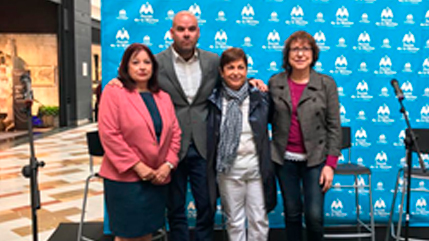 Sponsorship funds of €500 went to support the race in Benidoleig, which also benefited from a publicity boost thanks to Portal de la Marina’s communications channels (advertising slots, social media, press, etc.). By getting the word out, we helped encourage as many people as possible to take part.

The second event was a sponsored walk that took place in Dénia on 7 April. The shopping centre supported the initiative with a contribution of €1,500. Again, we helped raise the profile of the event by publicising it through the centre’s communication channels and social media platforms. Portal de la Marina also lent its support to a “12 marathons in 12 months” challenge: Esperança 506. We’re backing Carlos Siscar, a runner who set himself the challenge of running 506 km in one year, with sponsorship money going towards cancer research. 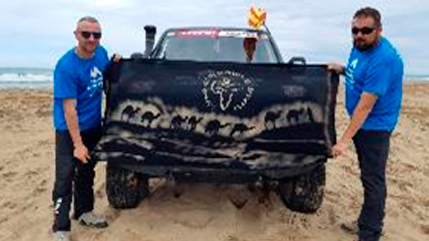 Once again, this April we teamed up with other sponsors to support the Solidarity Rally in aid of communities in the Moroccan Sahara. Team Tronquet 71 Portal de la Marina, gave their all to the Maroc Challenge, finishing the race in first place. It was a car packed to the roof with hope, medicines and school supplies for the most underprivileged desert communities.

Meanwhile, the shopping centre hosted an exhibition to introduce visitors to this very worthwhile initiative, displaying photographs from the race and showcasing the charitable work it makes possible. 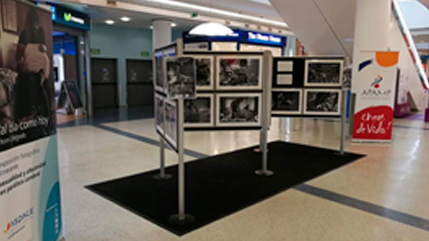 The Gran Vía de Vigo shopping centre co-hosts an annual photographic exhibition aimed at raising awareness and understanding of cerebral palsy. This year’s selection could be enjoyed between 20 February and 6 March. 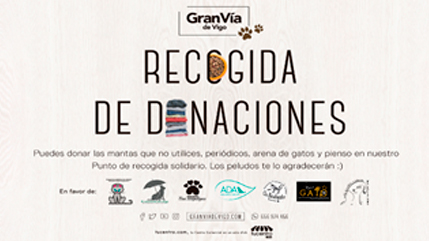 We have set up two collection points within the shopping centre, where visitors can donate blankets, animal feed, sand and newspapers to support the work of seven animal welfare charities. So far this year, our customers have donated 300 kg of everyday essentials. 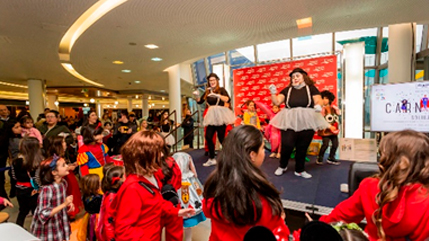 Children aged between 2 and 12 put on their best fancy dress with the chance of taking home a prize at our costume competition, all for a good cause. Each entrant made a donation of €10, allowing us to raise a total of €1,200 for three different charities:

Every Sunday, families can enjoy a free show in the main theatre at GV cinemas — all they need to do is make a donation to the Vigo Food Bank. In 2018, we collected more than 2000 kg of goods; this year, we’re hoping to smash that figure. 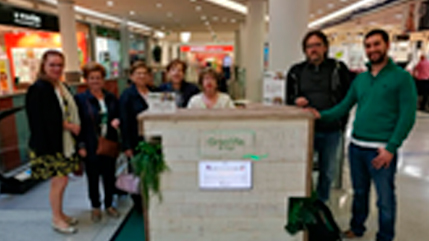 A Space for Giving

In May, we introduced our Space for Giving (Espacio Solidario), offering charities and NGOs the chance to run a stand at the Gran Vía de Vigo shopping centre. Throughout the year, we worked with them on various campaigns aimed at promoting and raising awareness of charitable causes.

Gran Vía de Vigo got its groove on at its very first charitable silent party.

This free, family-friendly event took place on 12 July on the shopping centre’s landscaped roof. Three DJs took to the decks without making a sound, with partygoers enjoying the beats through headphones.

Entry was limited to 200, with all ages welcome. A total of €1,100 was raised for the Spanish Association Against Cancer (AECC) (€5 entry fee, plus €100 from the costume competition held during the event).

There was great fun to be had at the First World Charity Puddle Jumping Championship.

Taking part in the first ever charitable event of its kind was completely free, as we declared ourselves the Spanish Puddle Jumping Association. The goal was to assert our right to reclaim the wonder of childhood. We created a spectacular space centred around a 3 x 2 m puddle, complete with mud and a splash-o-metre to help the jury pick the winners. Visitors also had the chance to enjoy live music, courtesy of the band Broken Peach.

For the third year, we held a charity casting session to select the stars of the Autumn/Winter edition of our CSR magazine. This year, we were looking for dynamic duos willing to lend their faces to a worthy cause. The event was a great success, attracting 61 pairs of entrants. A total of €500 was raised for AECC, with a further €200 donated by the shopping centre.

Throughout the year, the Gran Vía de Vigo shopping centre presented three cooking demos, each on a different culinary theme, with the aim of encouraging visitors to make a donation to local food banks. Overall, we collected over 220 kg of donations, thanks to the 2 kg “entry charge” for those wishing to attend.

The final event took the form of a “blind date”, with participants challenged to guess the various recipes and products on offer by relying on certain senses (smell, touch and taste).

Launched by Lar España, this event was conceived as a way to foster innovation. Companies and entrepreneurs were invited to present their projects in three different categories:

El Rosal shopping centre is home to the ADISBIER Association (the El Bierzo Association for People with Disabilities) head office, which runs regular workshops in the centre’s dedicated co-working space. Each Wednesday in September and October they offered basketmaking workshops, with all places quickly snapped up. Previous workshops have included sessions on literature and disability and on ability and culture. 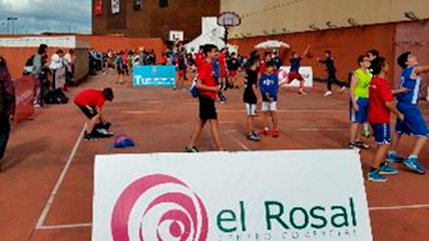 El Rosal played host to an exciting three-a-side basketball tournament. More than 100 youngsters from all across the local area enjoyed a full day of sport and friendly competition. Matches took place from morning until evening, with a break in the middle of the day to allow families to enjoy a meal together, before the prize-giving ceremony at 8 pm. 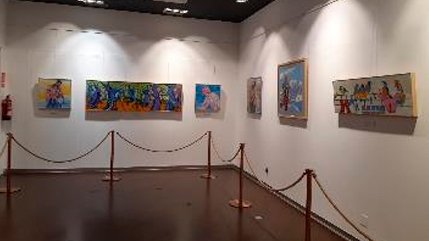 El Rosal has been transformed into an art gallery to help raise the profiles of local artists. The Escapararte exhibition can be found on the upper floor of the shopping centre. It’s a special place where local artists of all kinds can showcase their work and visitors can enjoy an artistic interlude. Exhibitions will rotate every two months in order to promote the greatest range of artists. 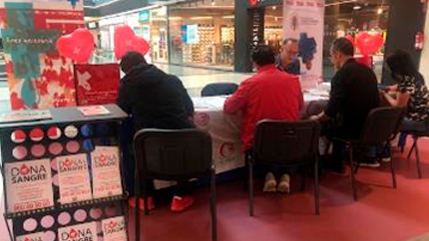 Twice a year, the El Rosal shopping centre teams up with the El Bierzo and Laciana Blood Donors’ Association to encourage visitors to give blood. A donation point is set up outside the shopping centre, and every donor is rewarded with a free cinema ticket. This year, 992 donors came forward to help the campaign. 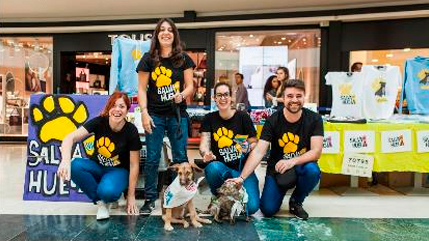 At the Ánec Blau shopping centre, we have a monthly visit from the charity Salva 1 Huella, dedicated to rehoming abandoned dogs. Over the course of 2019, we collected more than 90 kg of dog food and €2,339.10 in cash; what’s more, we helped 11 pooches find a new home. At Ánec Blau, we’re serious about being pet friendly!

Albacenter was popping with colour at the third edition of this vibrant event. After generating a real buzz on social media, the festival of colour raised €1,500 in entry fees for ACEPAIN, an Albacete cancer research organisation. 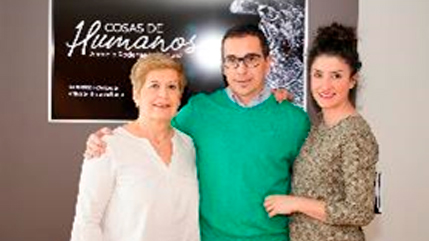 Antonio Rodenas launched his new book, “Cosas de Humanos”, at an event in aid of the fight against Parkinson’s Disease held in the Activity Room. In attendance were the President of the Parkinson’s Association, Lola Játiva, and local Councillor for Social Action, Justo Fernández (also President of Discap-ab). They were joined by presenter María García (Head of esRadio) and influencer Lola Muños, both appearing free of charge. 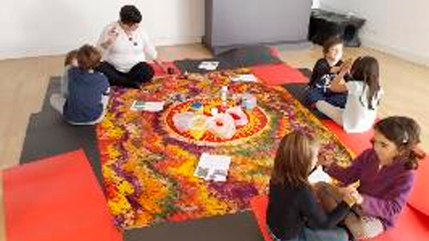 A number of projects and initiatives were organised on a not-for-profit basis in order to support public education and awareness in relation to human rights and the struggle for real equality of opportunity: 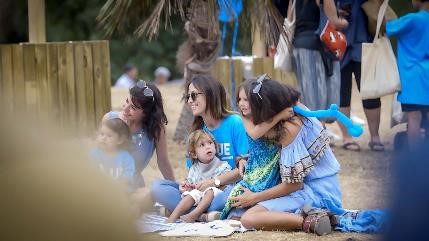 On 7 July, Ánec Blau launched its outdoor marketplace, SummerQuack, in memorable style with the Fiesta Azul Solidaria. For one evening, the terrace was bathed in blue, a colour shared by the shopping centre and autism charity ISTEA. Our guests were joined by a local influencer, while live music and activities for children made for a lively mood. Anyone who showed up dressed in blue was rewarded with goodies and the chance to enter one of our prize draws.

We marked World Cancer Day with a wandering batucada band, enjoyed, among others, by the President of the AECC. All of the local authorities lent their support to help promote the fight against cancer and raise awareness of this disease.