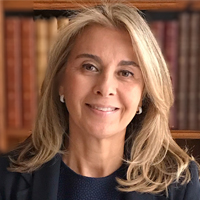 Ms. Leticia has a degree in Economics and Business Studies from Univerdidad Pontificia Comillas (ICADE) and is member of the Official Registry of Auditors of Spain (ROAC), PRODIS Foundation Special Employment Center Patron, as well as ICADE Business Club Board member.